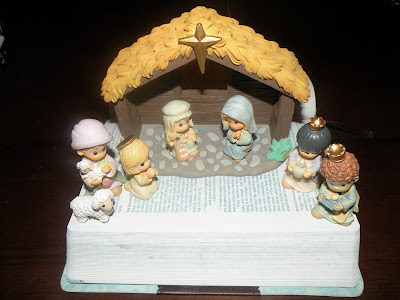 I've just come away from a brief discussion with a friend about my nativity. Well, one of my nativities. I have 3 now. One is large and ornate, with figures 10 inches high, and it covers my entire mantle when it's set up "properly". It's full of vivid jewel tones and encrusted with rhinestones. It positively dazzles. I appreciate that it is a "multi-cultural" set, with 1 or 2 black characters in the "wise man" department. It was a beautiful gift from my grandmother.
My second one is a polar opposite from the first. Every piece to the set is carved of a cool-to-the-touch limestone, and it was delivered to me as a gift, straight from Africa. Every piece is carefully handcarved and etched with painstaking detail, but it is, at best...simple. There is absolutely no color to it. It's stark white, and the tallest figure may possibly reach 4 to 5 inches in height. It's difficult to differentiate which character is which, because they're almost identical to one another. Each year, with a guess and a brief prayer for forgiveness if I've gotten it wrong, I set it up, making sure the character with the wide hips and full lips (Mary) gets the proper position beside the tiny manger. I love to turn the figures over in my hands and let my fingers slip across the cold smoothness of the stone.
My third set is one that I bought this year at the grocery store, for $11.99. It's made of a strong resin, by the "Precious Moments" company, and it's just the right size for the hands of a 3 year old to play with. It actually came with a short stable, complete with golden star above, 3 wise guys, 1 shepherd, 1 sheep, a kneeling angel, and of course, Mary, Joseph and Jesus...all decked out in their pastel best. You'll see it's picture above.
When you look at that photo, you might notice 2 problems. We're short 1 wise man, and 1 very crucial baby. That's where the discussion with my friend comes back into play. You see, I know where the wise man is. He's stuffed in one of my dresser drawers, with his head broken off. An altercation between a 1 year old and a 3 year old left him decapitated. But the baby, Jesus? No idea. I've scoured the house, searched drawers, closets, toy boxes...nobody knows his whereabouts. When I told this to my friend, she said that my Baby Jesus was probably somewhere with her Joseph figure.
That got me thinking. If all the Mama's who are missing a piece or 2 got together and actually found them all, we'd have a whole new look to a nativity. Maybe it would be a nativity where figures of different shapes and sizes were all together, all worshipping a baby Jesus...and dare I say it...He might not even have blonde hair and blue eyes! AND...those wise guys wouldn't be anywhere near the manger, because history tells us that they didn't show up until 2 years after Jesus' birth. Maybe we'd have dirty animals, and dusty clothing and weary faces, and an army of angels, along with some shepherds who look a little unsure as to why they've even been called in.
Now, I know it's now December 31st, and many of us have already packed those nativities up until next year, but maybe, just maybe we could all give a few more thoughts to the reality of the nativity. Maybe some of us have lives that look like my nativity...short on wisdom, and missing Jesus. What better day than today to find Jesus again, to replace some wisdom for some foolishness, and to make a new start?
Happy New Year. May you take Jesus into it with you.

Clever and thoughtful. Thanks.

Finally got to catch up with your blog....good stuff. Thanks for sharing.

Well my nice nativity didn't survive the packing this year. :( Good words though and I. Miss. You.!