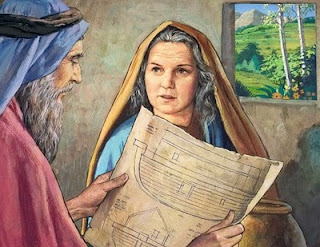 I've just been reading and thinking about the story of Noah. I've thought for many years that if there was one woman in the Bible I'd really like to talk with, it would be Noah's wife. I mean, seriously...her husband gets a word from God about water falling from the sky. Not just a drizzle, but enough to drown and destroy the entire planet and everything in it. And, let us not forget...there had never been a drop of rain before. Ever. Don't you think she looked at him and said, "Now, Noah. Let's just talk about this for a minute. First of all, water doesn't come from the sky, and secondly, I just can't see myself living on a big boat with a bunch of stinky animals. And, how do you expect me not to get a pedicure for 40 days or more? These sandals and dirt roads do NOT do a girl any favors, Noah!" (Ok, so maybe it wasn't a pedicure, but there were surely some things that a woman needs that she'd be missing a great deal.)
100 years of ridicule followed that conversation. Every woman in the city must have knocked on Mrs. Noah's door and looked on her with pity. "Poor Mrs. Noah, her husband has gone crazy and still she stands by him and even says she believes he's heard from God on this." Women know women. And, we know that a woman can either be your best friend or your worst enemy. She can be the one who lifts you up or who drags you down. Think about your friends, your enemies, and yourself. How do you respond to a person who truly believes that God has spoken a holy and precious promise to..when that promise seems highly unlikely to you?
And what about that 100 years of effort? Do you honestly think he just went to work and then came home and didn't talk about it? Of course not! I'm sure that Noah was as excited as any man is when he's delving into something huge and impressive. He worked all the time, He talked about it all the time, his sons were involved and you better believe Mrs. Noah had her hands in the effort as well. If she was anything like me, I'm sure she was supervising and giving gentle reminders like, "Noah, God said 75 feet wide and you only made it 74. You need to spend some more time with the Lord and your measuring tape. Now go back and re-cut that and I'll go check all your other measurements!" (And I would be doing all of this while sipping sweet tea, but I'm not certain that she had a McDonald's around the corner.)
Joining forces with her husband had to have been a difficult choice in the beginning, but scriptures prove her loyalty to Noah, and to God's plan, because after 100 years of her life were gone, devoted to this seemingly insurmountable project, she stepped on that great big boat, beside her man, and walking two Yorkies on monogrammed leashes. (Just go with me on this one...I'm pretty sure that actually happened. Almost positive.)
Now, I don't even like to begin thinking about what the actual trip must have been like. I imagine it as a time of great sorrow and mourning. To have literally lost every friend you've ever known, and to know that they've all drowned, flailing outside a door that God himself closed, is more than I can fathom. And to consider the stench inside that ark, and the constant motion and hopelessness would have been horrendous. However, after coming to a place of peace and stillness outside that boat and inside her heart, Mrs. Noah stood on a lush, green mountaintop, and experienced another of God's promises, under the beauty of the first rainbow mankind had ever known. Her world would never be rocked in this way again. She was loyal, she was faithful, she worked hard, and she should be honored for presenting Christian women with one more look at a story that would have looked so different, if she hadn't played her part...and played it well. She was a real woman.