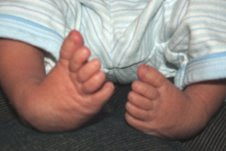 I'll not spend an hour typing all the things I'm thankful for, because this year there's one thing above all else that means the most to me. My baby boy was born 15 months ago with Club Feet. Both of his feet were fully turned inward and then inverted over, so that when he looked down, he saw the soles of his feet. Five days after his birth, I sat down across from the best Orthopaedic surgeon in Georgia, and she said to me, "He'll never be normal, but we'll do our best." There are no words to describe what a mother feels in that moment. But the words that I heard after hers, came from One who had a different report. My response to the surgeon was, "Thank you for your opinion. He's going to be just fine." We left the office that day with a 5 day old baby who was wearing full leg casts on both legs. Those casts were changed out for new ones once a week for 7 weeks, at which time the baby underwent a minor surgery which helped to lengthen each achilles tendon, and then back into casts. After the casts were removed, 3 weeks later, for the last time, the baby was fitted for a pair of shoes which were attached to a bar, to be worn from then on, 23 hours a day. After a year, we were able to go down do the apparatus only being worn during night time and naps. At his last visit, the surgeon took x-rays again, and then came back into the room with this report: "He's perfect. He looks great. I'm very, very pleased. If all of my club foot babies turned out like him, I'd really think I was onto something. I'm amazed." I assured her that we've been praying for this baby and that I knew he'd eventually walk. Well, last week, at 15 months of age, with his perfect feet bare and in position, he took his first steps!!! He is now wobbling around the house and laughing all the while. It's like he knows that this is his own personal miracle. The baby's name is Silas. And, Silas means "sound". Sound has many meanings. Most of us think first of the audible sound, but there's also the sound that means peace, and the sound that means perfect and whole. We have all of those in this child. God has never failed us, and it is for this miracle that I am truly thankful. What are you thankful for?

I'm thankful for you, your family, AND for sharing this awesome story!

I have tears in my eyes. That is so awesome!

We are missing you guys today and hope that Mr. I is feeling better.

Wow. God is so good. Thanks for the encouraging story. PS I like the name of your blog!